I have been trying to think, since I landed back in the UK at 1.30am local time, how to describe Rome, what to tell people, how to do it justice.  And I must admit that I am struggling.  So, instead of trying to warble my way through some higgle-de-piggle-de explanation I thought I would instead tell you about why I went to Rome in the first place and then go from there.

This isn’t a post about knitting or crochet I’m afraid, it’s just an excuse to share some holiday snaps and sell the virtues of Rome, so if you don’t want to read I won’t be offended!!

I went to Rome for many reasons.  The first is that I had just left a job which I had been very unhappy in and had a 2 week break before starting my new job, and I wanted to go on an adventure.  The second is that I had been watching a lot of historical documentaries about Ancient Rome and Ancient Greece while I had been knitting in the evenings and I desperately wanted to go and see the Ara Pacis.

So, without much thought and with a painfully small amount of planning and an even tinier about of Italian (I now apologise to my friends and families who worried greatly on my behalf while I ran around with my head in the clouds oblivious to quite what I was doing) I headed off to spend 5 days and 4 nights in the Italian capital.  On my own. 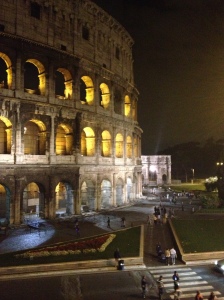 Colesseum and Constantines Arch at night

Now, I wasn’t worried about this, since I have been back I have found out that many other people were!  But, it was all ok, so nothing to worry about…

Rome is an strange city to try and describe, there is a somewhat painful clash of truly ancient and ridiculously modern.  My initial impression of the city was one of disappointment, of confusion and surprise at this almost offensive mish-mash of times.  But the more I explored and explored the more I came to see that  it wasn’t a clash or mish-mash, it was a beautifully intricate development.

I have never seen sculpture like that displayed there, and it is on public display everywhere you look.  The people are wonderful, the food is fabulous and the wine is very, very cheap!!  I ate outside in street restaurants for every meal I had there and got to experience street sellers shoving singing, dancing cuddly toys in my face, I got to feel the tram come rushing past the side of my table as I ate my meal, and I got to watch people, both local and tourist, as they made their way through this eclectic city.

Will I go back?

Me, outside the Colesseum at 2am on my last night, with one of my arms looking very manly!!!